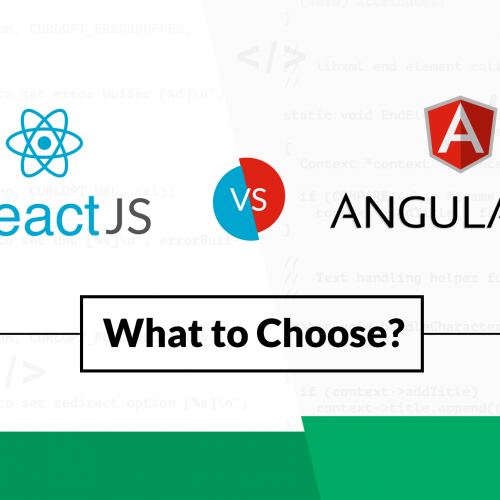 If you are exploring through full-stack development with your front end development prowess, then you will need the assistance of Angular JS, Angular or React. It is hard to decide to choose among them to develop custom software by utilizing the current and new frameworks, although, angular is quite familiar among all the front end developers. A developer needs to be flexible with the evolving trends in technology. One must adapt suitably with the current trends in technology but shouldn’t be in haste or lazy to adapt to the same. Before you get started on your custom project, you must carefully choose the most relevant technology by scrutinizing through its features, pros, and cons. Hence you must go through the difference between Angular vs. Angular JS vs. React to choose your favorite one.

FRAMEWORK- It encompasses standardized pre-written code that enhances the utility and helps in easier and faster development of certain functionalities. Your coding will be guided by the requirement of the architecture of the framework. You can’t code as you wish to.

LIBRARY- You can develop any software by using the functions and functionalities that are present in the library. You can explore through the collection in the library to design and construct at your will. The coder has the full liberty to choose among the functions from the library. It imposes more responsibility on the developer as it imparts more freedom.

Key Differences Between Angular Js Or Angular Or React

Angular and Angular JS has fully featured MVC framework or MVVM framework (Model View Whatever) while React JS has open-source JS library. The directives, supported by Angular JS, help in creating reusable code. The dependency injection mechanism helps in testing the front end applications. React has more emphasis on V in the “MVC” framework. The MVC structure of Angular can be divided into three interconnected components that are easier to handle and manipulate. You can handle a complex project with a well-structured code that is provided by MVC architecture.

The toolchain provided by Angular and React JS is high while that for Angular JS is low.

The learning curve is based on individual skill and expertise in using the given technologies. It has been observed that TypeScript is more challenging to learn as compared to JSX. Hence the learning curve of angular is more as compared to react. When JSX is augmented with Redux, then it becomes harder to grasp by beginners. Mastering over JavaScript for Angular JS is comparatively easier to accomplish.

DOM stands for Data Object Model of a web application. You can choose between regular and virtual DOM. Virtual DOM is a simplified version of the regular DOM where you can change any element easily. Angular is a complete framework while React is a JavaScript library. React is concerned with one direction data flow where it updates the virtual DOM while Angular is related to two-direction data flow where it updates regular DOM. In Angular JS, the view manipulates the DOM to update data easily. The DOM manipulation is obtained as the task of the directives.

Angular and Angular JS is convenient to set up and get started, but they take a long time to deliver projects because they have a steeper learning curve. The coding time is increased due to unnecessary syntax. On the contrary, React JS takes longer set up time, but it takes minimal time to deliver projects. You can use functions and functionalities from the JavaScript library to code flexible. You can develop both plans and apps quickly. You can add various features to your project by exploring through its library.

The directives on Angular JS help to manipulate DOM. Every developer can customize a new directive. The standard directives of Angular are unique. Ng-model in Angular JS assists you in creating two-way data binding while ng-bind helps you to develop one-way data binding. Angular have only ng-model to create data binding. There are no divisions in templates and directives in React JS. Whenever an event occurs, React reinterprets all the User Interface and templates every time. You can compare the contrasting difference between Angular 8 vs. React.

In a nutshell, it is evident that both React JS and Angular JS have great and powerful documentation with excellent community support, but both operate on a different philosophy. The features mentioned above state the apparent difference of React JS vs. Angular JS.

Which Is Better Angular Or React?

React is well suited for limited logic and computation of fewer applications. You can build any application suiting to any custom requirement. React is ideally suited to develop dynamic applications due to virtual DOM support. It can swiftly react to any changes made by the user. Angular, on the other hand, is well suited to develop cross-platform mobile apps. It will take various limitation factors into consideration. React is also useful to create single-page apps that contain the updated content of the page. You can develop enterprise software using Angular’s MVC framework. React is ideally helpful to create native mobile apps, whereas Angular can be used to create both progressive web applications and native mobile applications. Angular is mostly preferred when you have an extensive application that necessitates a strict code structure.

If you need any assistance related to the above three given technologies, then :